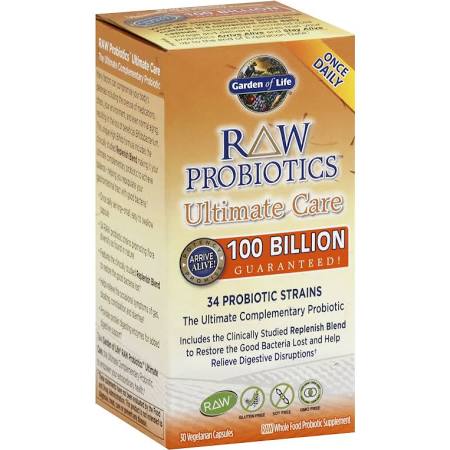 With an astounding 34 strains and the 100 Billion CFU count, this was a product that we were VERY excited to review! The results? For the most part, quite positive!

Of the 34 strains the Raw Probiotics Ultimate Care contains, nearly a third are very well documented and evidence supported. Additionally, almost a full 40% of the strains were still living upon our analysis!

The only reason that this probiotic wasn’t placed higher was because some of our analysts had doubts as to whether the effective CFU count, just shy of 40 Billion, was enough to provide an adequate level of cultures for each of the 34 probiotic strains.

In the end, we ran follow up exams on the strains to see if they had successfully formed colonies; which around 65% had. Due to the variation in the success of the probiotic colonies, we had to lower Raw Probiotics’ score accordingly.

What to expect from the strains

The benefits associated with the 34 specific strains include: increased nutrient uptake from all sources, increased metabolism, and weight loss; as well as a reduction in symptoms such as upset stomach, diarrhea, constipation, and any antibiotic-associated symptoms. The cultures in Raw Probiotics Ultimate Care reduce the likelihood of bacterial infections within the sinuses and throughout the digestive tract.

Raw Probiotics is composed of very well-documented probiotic strains and is an effective addition to any lifestyle, capable of conferring a wide variety of health benefits.

The probiotic strains are not only diverse, they were also resilient to outside influences and, in many cases, were successful in establishing colonies within the digestive tracts of study participants. Individuals participating in our studies also reported significant weight loss and moderate positive gains in overall musculature.

This product is safe for pets and children, but it is always wise to consult a physician before taking any supplement if you are pregnant or nursing.

Despite the enormous CFU advertised by Raw Probiotics, a large portion of the probiotic colonies were no longer alive upon analysis. This resulted in the effective CFU being a third of what was claimed by the product. The result was a compromise in the integrity of the overall product, although it must be said that even a third of the claimed value the CFU still scores well within the upper spectrum of general probiotics.

There is also no Bacillus coagulans in this probiotic, limiting the weight loss capabilities of the supplement.

Also, check out our Top Probiotics of 2015 reviews right here.