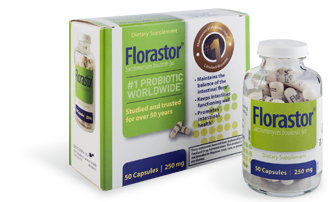 Consider these a probiotic sniper rifle for antibiotic-associated diarrhea. If you aren’t looking for any of the other health benefits of probiotics, this should be your weapon of choice.

It contains one potent, high quality strain. Florastor has been around for quite a while, which has lent it the reputation of being the ‘go to’ probiotic for the nasty antibiotic after-effects. While well-founded, we at CHR would still recommend BlueBiotics for antibiotic-related health issues.

What to expect from the strains

Florastor does what it promises and reliably so. Florastor has been a consistent force on the probiotic market for a number of years and, as such, is a trusted brand for alleviating gastrointestinal issues. This product is safe for pets and children, but it is always wise to consult a physician before taking any supplement if you are pregnant or nursing.

When compared to other brands, the problems which Florastor addresses are somewhat imbalanced in contrast to its higher pricing. Because of this, Florastor is not recommended as a general-use, or preventative, probiotic. Instead, it is considered solely as a treatment option, albeit a good one, for gastrointestinal disorders.

How to Buy Florastor

Florastor can be found on Amazon.com here.

Also, check out our Top Probiotics of 2017 reviews right here.